To allow the launching of clients by the FWD server, a tool called the spawner is provided with FWD. This tool is responsible for spawning a new FWD client in a distinct process at the OS level, using specific credentials (which are “read” depending on the type of client being spawned).

The spawner relies on the spawn (on Linux/UNIX) or spawn.exe (on Windows) tool, which is automatically invoked by the FWD Server, in situations when it needs to automatically launch a client.

The spawner infrastructure allows different kind of clients to be silently started by FWD; this includes:

Considering these cases, the spawner will allow password-less logins (when a new batch process or appserver Agent is started) or user-specified logins, in case of web clients. This chapter will provide details about how to build, install and configure the spawner tool, regardless of how it is intended to be used.

The spawn tool is automatically built by the FWD native task, from the build.xml file. Complete details about how to fully build FWD (and the external dependencies) are found in the Building FWD From Source chapter of this book.

On Linux, installing the spawner can be done automatically when building the native task, by passing some special properties to the ant command; the user who launches this command needs to have sudo rights, required by the special permissions set for these files. Also, these properties depend on how the spawn tool is expected to be used:

If the FWD Server is configured as an appserver or batch processes are expected to be launched from FWD Server side (regardless if web clients are used or not), then this command needs to be used:

2. For spawning only web clients.

If only web clients are used, then this command needs to be used:

The jar task is specified in the above commands because the spawn tool relies on p2j.jar to launch the clients. The meaning of these properties is:

After the post-build part of the native task is done, the files copied in the target folder will all be owned by root and will have these permissions:

If the spawner files installed in the folder specified during post-build are manually moved to another folder, it is important for the names, permissions and ownership of these files to be maintained; otherwise, the spawner tool will not work, as it can't guarantee the security of the tool.

3. Reinstall when FWD is rebuilt.

In non-local spawning approaches, the spawner creates a temporary session from the client to the server using the jar file on the client. If that jar is not the same one as the server jar, then it will cause problems/failures. With each new FWD revision, the build will change the serialization version numbers of the various Java classes used for network communication. This means that deserializing objects will fail during network transmission, if their class version ID does not match. For this reason, when FWD is rebuilt for whatever reason, the spawn tool needs to be reinstalled.

On Windows, it is required to manually copy and configure the spawner.

Copy the following files (with these exact names) into a folder of your choosing (for example, p2j/spawner/):

On the Windows operating system, it is not possible to launch a process as another user without knowing that user's OS password. As the user's OS password has to be saved in the directory, the spawn.ini file allows the encryption of the passwords, using a master password. The structure of this file is (all are mandatory):

If needed, the user OS passwords can be encrypted using the command spawn.exe 9 <user-password> command, which writes the encrypted password to STDOUT; note that the enabled property is required to be set to 1, to use this feature. It is required to run the spawn.exe such that the spawn.ini can be found in the current directory. The spawn.exe reads .\\spawn.ini to get the encryption configuration. Then it encodes the password and prints it out.

At that point the encrypted version should be added to the directory. See Web Client Setup for details.

On Windows, the spawn.exe uses the JVM.DLL to launch a new JVM instance. The java.exe and JVM.DLL must be located in the system PATH as noted in Install the JVM. Usually it is located in jre\bin\server subdirectory of the main JDK tree.

Do not put jvm.dll into spawner directory instead. Such an approach will not work and it will be quite difficult to diagnose the failure.

As seen in the following listing, the JVM.DLL has dependencies on system DLLs and also has a dependency on MSVCR100.DLL which does not ship with the OS.

For spawn.exe to work properly, it is required to install Microsoft Visual C++ 2010 Redistributable Package if the system does not yet have it. The respective packages can be found here:

Just download respective package and install it before usage of the Web Client.

The spawner is a tool that runs processes on behalf of a user other than current one. Some antivirus software can consider this program/action as virus activity preventing normal execution. If this is an issue, after check-summing spawn.exe it can be added to exception list for Windows Defender (or other antivirus software) to avoid this issue.

When the spawn.exe running very first time with java.exe the user see the another Security window asking to allow(or not) the execution for java program. Allowing is important because if not to do so the java programs will not work. This is one time action per fresh Windows system. No need to do this every time of the spawn.exe + java.exe combination.

For example in Windows 7 the following screen will be shown: 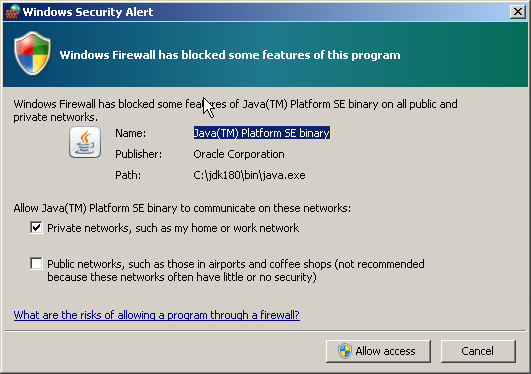 8. Reinstall when FWD is rebuilt.

In non-local spawning approaches, the spawner creates a temporary session from the client to the server using the jar file on the client. If that jar is not the same one as the server jar, then it will cause problems/failures. With each new FWD revision, the build will change the serialization version numbers of the various Java classes used for network communication. This means that deserializing objects will fail during network transmission, if their class version ID does not match. For this reason, when FWD is rebuilt for whatever reason, the spawn tool needs to be reinstalled.

The directory configuration for the FWD Clients automatically started from the FWD server side reside in clientConfig nodes. This node can be specified either per-server or per-account. The following list specifies the order on which a certain clientConfig/ node will be searched:

The following table shows all the possible configurations which can be specified for a FWD client automatically spawned from server side, and how this maps to the command used to launch the OS process, for the remote FWD client:

In this table, the $P2J_JAR_FOLDER represents the folder where the FWD Server's jar is located (computed automatically at runtime). Also, keep in mind that for nodes which work with system file paths or commands, it is important to specify these files and paths using the operating system's file and path separators (the OS on which the FWD client will be spawned).

Following is an example of a fully configured node:

In some cases, the FWD Client or the spawner needs to obtain a secure connection back to the FWD Server, for some additional data or work. To allow this, the environment on which the spawner tool is launched is populated with properties holding the the subject ID and password of a temporary FWD user account. The user IDs for these temporary accounts are re-generated on each server startup and added to a pool: each time a temporary account is polled from the pool, its password is randomly generated. Also, they are very short lived: a temporary account is enabled only just before the FWD Server needs it, otherwise being disabled. All these user accounts are automatically added to the temps group, so they can be easily distinguished in the Administrative Console.

The number of these temporary accounts depends on the FWD application server usage: the expected number of users which will use web clients simultaneously, the number of FWD batch processes or appserver Agents being automatically launched, etc. This is configured via a tempClient/ node, set at the per-server configuration, under either the /server/<server-id>/ or /server/default/ node. The possible configurations are:

where a pool with 10 temporary accounts is configured, and a 2 minute wait is used when polling an account from the pool.

To allow the FWD server process to create the temporary accounts, it is required for the FWD server's subject ID to have read/write access to the /accounts/groups/ and /accounts/users/ namespaces, if the AdminResource plugin is configured. Also, if the SystemResource plugin is used, the FWD Server's subject ID must have access to the admin and accounts resource instances. Finally, to allow the spawner APIs to be invoked via network proxies, it is required to add access to the com.goldencode.p2j.main.Spawner and com.goldencode.p2j.main.RemoteSpawner interfaces if the NetResource plugin is used; additional interfaces might need to be configured, if remote process launching or appserver launchig is used. See the Access Control List chapter of this book for details about how to setup these permissions.

For security reasons, the password is recommended to be kept encrypted.

The steps take by the spawn tool to launch a FWD Client depends on how the client is started (password-less or not) and the operating system on which the FWD Client will be started. Following list describes these steps:

2. The spawner is launched using one of these two syntaxes:

3. The FWD Client is started by the spawner, in a child process which has the security context of the specified user. In this case, as the launching is done automatically, the FWD Client will connect to the remote FWD server using the temporary FWD credentials and check if it needs to do any additional work before launching the actual client; this includes:

4. The FWD server which initiated this request is notified that the FWD client was started successfully.