This chapter will explain how these work and why they are important.

Your Source Is Not Helping¶

For all common programming languages, application source code is simply a set of text files. Although many development tools (the most common of which are IDEs or Integrated Development Environments) do provide some level of syntax support, the majority of existing code was written manually by a programmer.

On a project of any significant size, that source code is text that was most probably written by many different humans. This text will have a range of variability depending on the existence of coding standards and the discipline/tools with which those standards are enforced. When a human is involved, the result is going to vary.

All programming languages have a valid syntax (the grammatical rules) that limit the variability of the result. This grammar can be designed to be more or less regular and more or less ambiguous. Beyond that problem of input variability, the 4GL language includes many features that allow programs to be coded in ways that are non-regular or ambiguous.

Most languages will have some non-regular and/or some ambiguous aspects. There is a natural trade off in design decisions. The more flexible the grammar, the larger the set of possible valid constructs that can be written by the programmer that creates new code while simultaneously magnifying the long term cost of reading, maintenance, debugging, support and refactoring.

Greater flexibility in syntax results in greater long term cost over the life cycle of an application.

The more regular and unambiguous the code, the easier it is to read (understand), maintain, debug, support, and refactor. If one were to calculate these long term costs, they usually will overwhelm the value of up front syntax flexibility in writing new code. When designing the grammar for a language, it should be a very rare and conscious decision to introduce something non-regular or ambiguous.

In comparison to nearly all modern languages, the designers of the Progress 4GL made several unusual decisions that were presumably intended to save development time.

The following are prominent examples but it is not an exhaustive list of all non-regularities in the 4GL:

The following are prominent examples but it is not an exhaustive list of all ambiguities in the 4GL:

In the preceding tables, the examples given are just for illustration. The actual number of ways these non-regular or ambiguous source forms can occur are quite large. The use of these “features” is pervasive throughout 4GL application source code. It is the rule rather than the exception. These features don’t exist in modern languages or if they occur it is in a very limited form.

In each of the above examples, at best there may have been a savings of a few seconds when the code was originally written. For example, typing DEF instead of DEFINE may save a fraction of a second. Spread over an entire program, perhaps it is possible that a a few minutes may have been saved during the original development.

The majority of time in initial development is spent thinking, not typing. Initial development time is spent in understanding requirements, planning the approach to implement the feature, testing and other kinds of tasks. It may have taken a day to write that program where perhaps three minutes were saved by using features of the 4GL which make the resulting code non-regular and ambiguous.

The majority of time spent doing subsequent development on that program is dependent on how readable (understandable) and simple the program is. Non-regular and ambiguous text makes code hard to understand and fragile (sensitive to minor changes or changes that seem unrelated). 4GL programs are full of non-regular or ambiguous text which will cost hours, days or weeks over the lifetime of those programs.

All of these add much more cost over the long term than they save in initial development time.

When the scale of large applications is factored in, it magnifies the problems inherent in human written source code.

Programmatic analysis or transformation of a 4GL application can only be done with tools that are aware of the 4GL language syntax. These tools must not only handle the syntax but they must also be able to properly handle both non-regular code and differentiate ambiguous code.

To enable proper analysis of code, the text form of the code must be transformed into a data structure that represents the pure syntax of the code. ASTs represent the code’s language syntax without syntactic sugar. The result is both regular and unambiguous.

ASTs are used by compilers and any other tools that programmatically process code.

FWD contains tools to convert source code (and schemata) into ASTs. This generically is called "parsing" and it is handled by an automated process called the ConversionDriver. The parsing is done in the "conversion front-end" which processes the entire application as a batch and the output is the complete set of ASTs. More details can be found in the Conversion Architecture chapter.

The specific process that takes a single source file and converts it into an AST is depicted here: 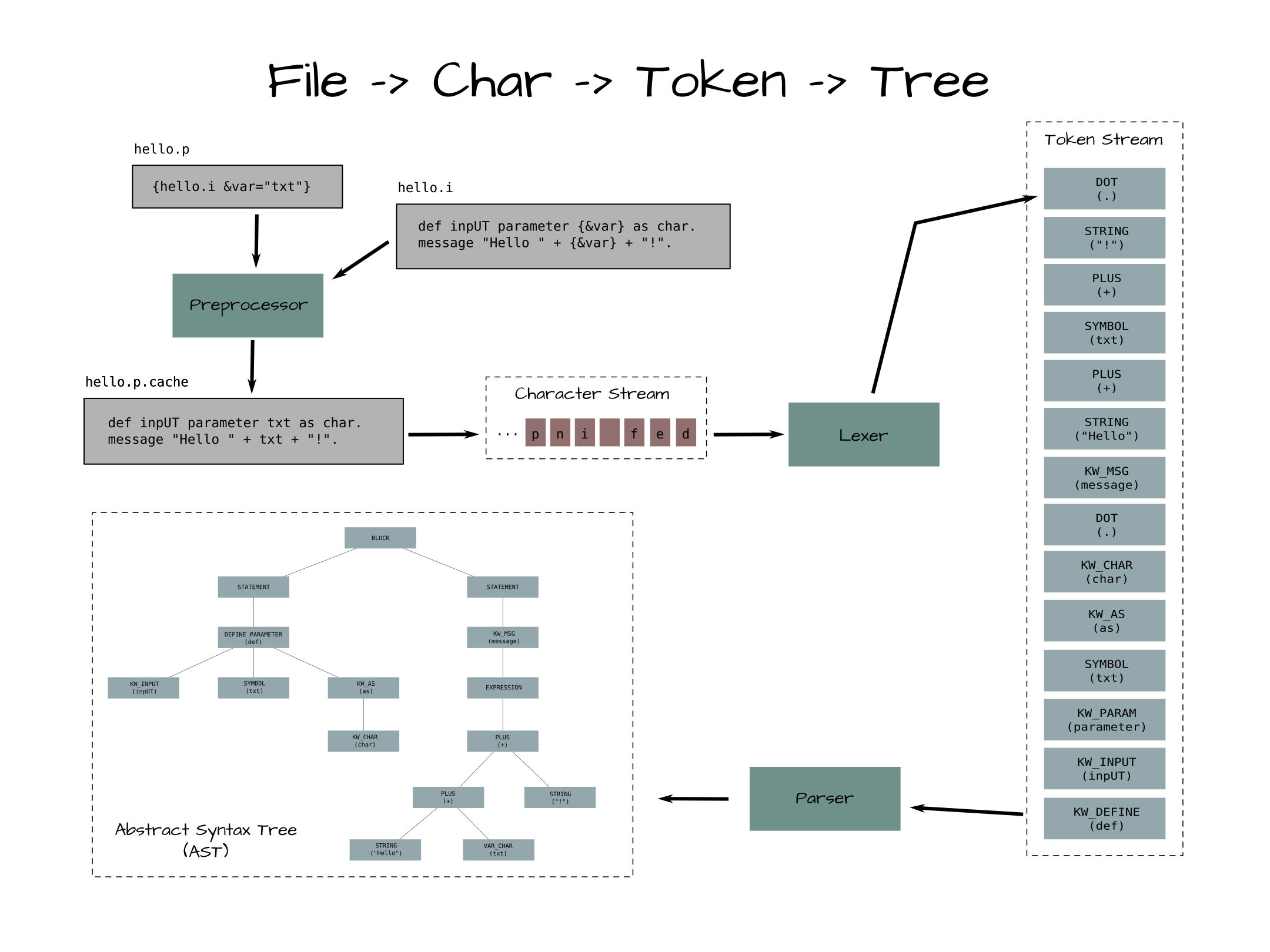 Summary of the process for a source file:

There is a simpler process that takes a schema definition (.df file) and converts it into an AST. This is handled by the SchemaLoader class.

FWD provides tools to parse an entire application. Each source file and each schema file (.df) is represented as an AST. TRPL is the analysis and transformation toolset in FWD which can operate on the entire set of ASTs as a batch.

To understand how trees are processed, one must understand the event model used in TRPL programs. 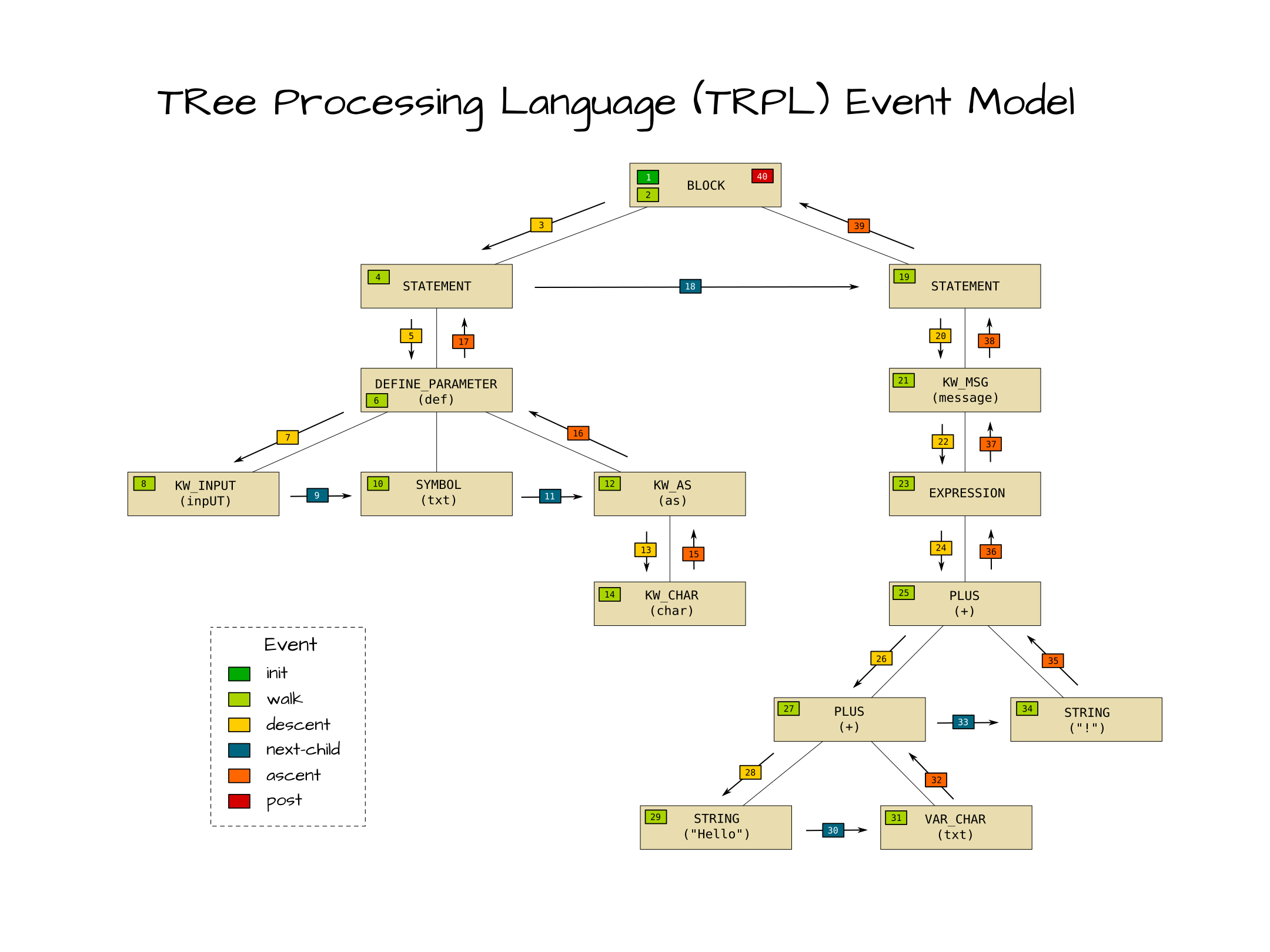 There are 6 kinds of tree events. Each event occurs at an AST node or between two AST nodes.

The numbers in the above diagram show the order in which these events occur. TRPL programs are written as sets of callbacks that are associated with a specific event. The TRPL engine processes each tree for each TRPL program and invokes those callbacks based on the matching events that are occurring.

Processing just the walk events for the whole tree would be the equivalent to the traditional visitor pattern. TRPL has a much richer set of events that make it easier to implement certain transforms or calculations than the simplistic visitor pattern.

TRPL programs can be pipelined to achieve incremental analysis or transformation, allowing complex processing to be split into a modular form.

The FWD AST implementation was designed with transformation in mind. At parse time, there is a great deal of knowledge about the code. Encoding that knowledge into the tree makes downstream work easier.

The result is a very rich AST.