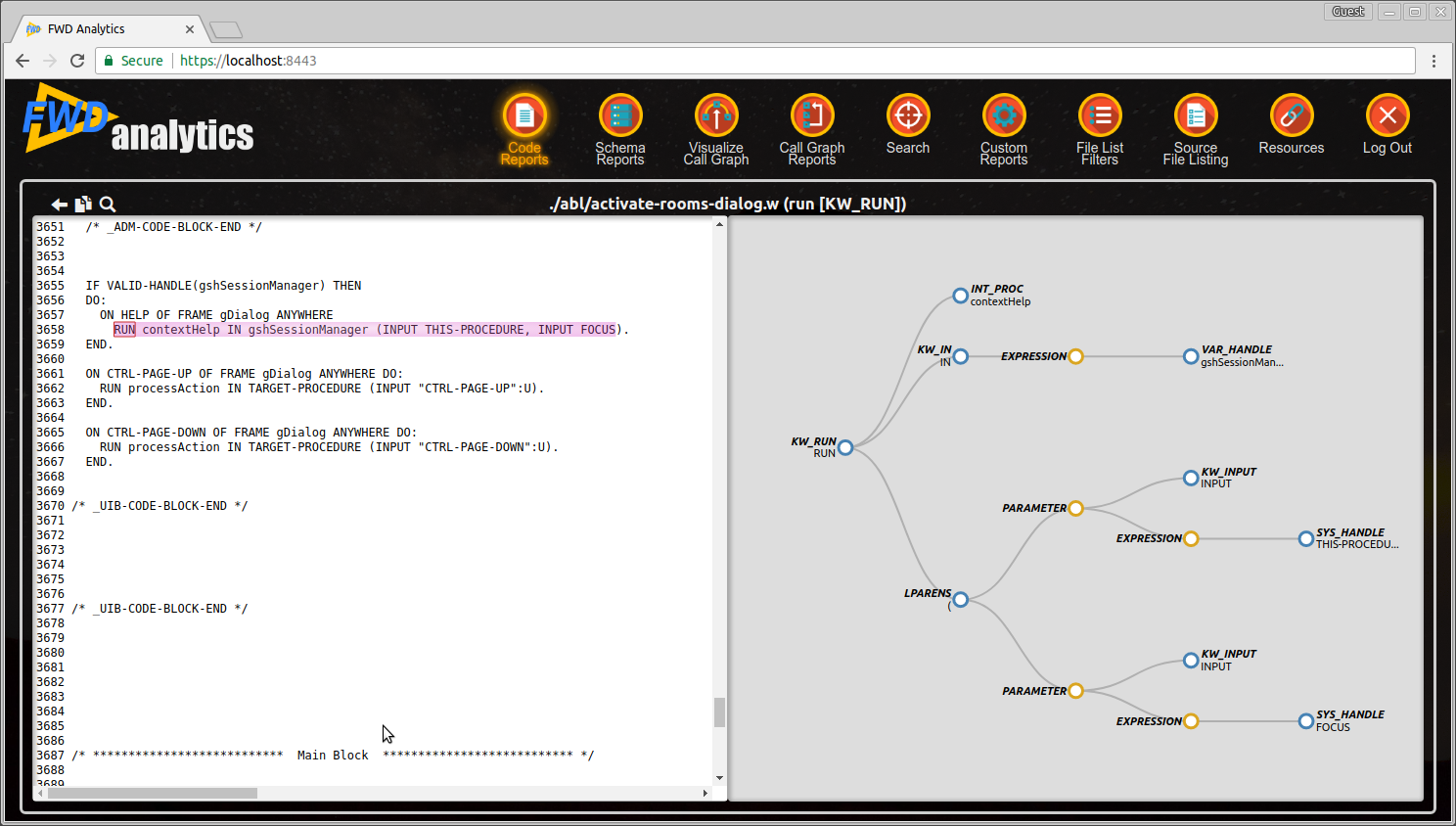 There are 3 places in the Code Analytics tools from which the Source View can be loaded:

In the top center of the screen is the filename and a short description of the node that is currently selected.

The arrow at the left is a kind of "back button" that is used to return to the screen from which this was loaded. DO NOT use the browser's back button. It will not work to navigate inside the Code Analytics application.

The left side of the Source View is called the Code Pane and it displays:

For source files, the code displayed is the fully preprocessed version (a.k.a. the .cache file).

The numbers on the far left are line numbers. Since the source code shown is the preprocessed version, any expansions or reductions in the code (e.g. a non-empty include file or a preprocessor &if directive) will cause the line numbers to be different from the original source file. This is the source code as the FWD conversion will see it or as the OpenEdge 4GL compiler will process it. 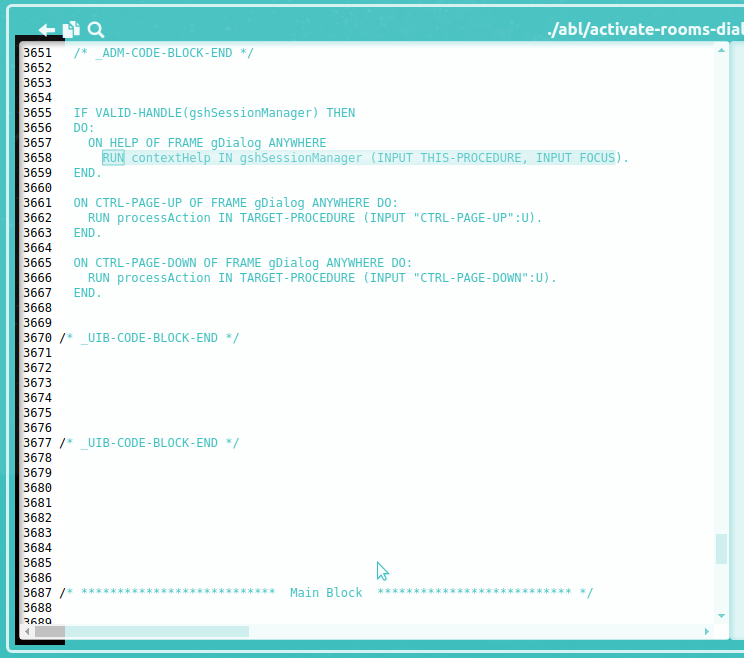 In this example, the line numbers and text displayed correspond with the ./abl/activate-rooms-dialog.w.cache.

A future enhancement will allow the specific include file to be determined for each character in the cache file. This information is recorded in the ./<source_path>/<filename>.pphints file and it simply hasn't been integrated in this view yet.

Please see Preprocessing Chapter, Techniques section to understand how to map the cache file line number back to the original source file and line.

On the right side of the Code Pane is a vertical scrollbar and on the bottom there is a horizontal scrollbar. These allow navigation throughout the entire file. 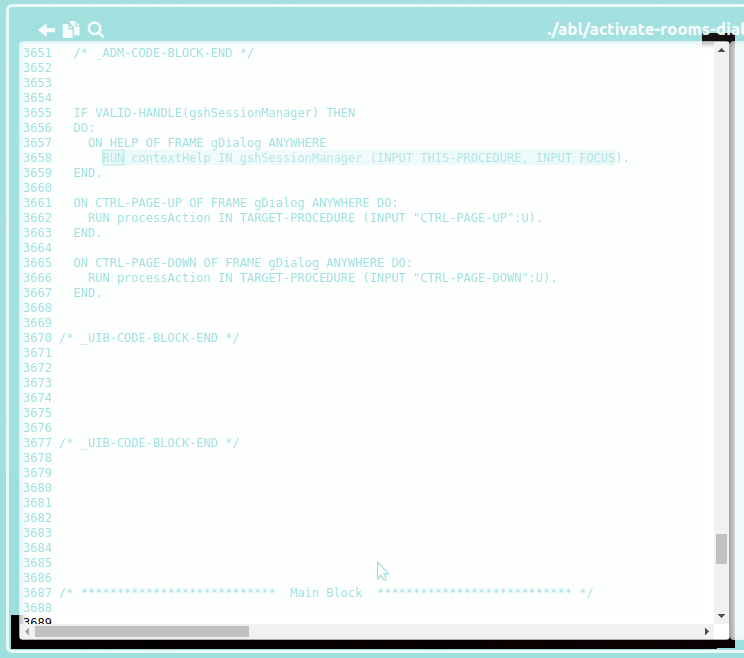 Using the mouse wheel on this view will scroll up or down as one might expect.

Of the three ways to get to this screen, two of them identify a specific AST node which is being displayed. This means that clicking on a specific entry in a Details Report or on an AST node in the Call Graph Visualization will load the Source View and associate the visible contents with the AST node that was selected in the prior view. This can be thought of as the "initial selection".

The contents of the Code Pane will be scrolled to the code associated with that AST. There will be a magenta highlight for that code. The text for the specific node will be drawn boxed with a slightly darker color and the text associated with the rest of the sub-tree is highlighted without a border. This highlight will stay around even when other AST nodes are selected.

Entry to the screen from the Source File Listing page has no AST associate with it and thus it will have no magenta highlight (and it will be positioned at the top of the file).

A left mouse click on text in the source that corresponds to AST nodes will cause a green highlight for that node and the sub-tree of nodes rooted at that node. The text for the specific node will be drawn boxed with a slightly darker color and the text associated with the rest of the sub-tree is highlighted without a border. This highlight will stay around until a different AST node is selected via the mouse. 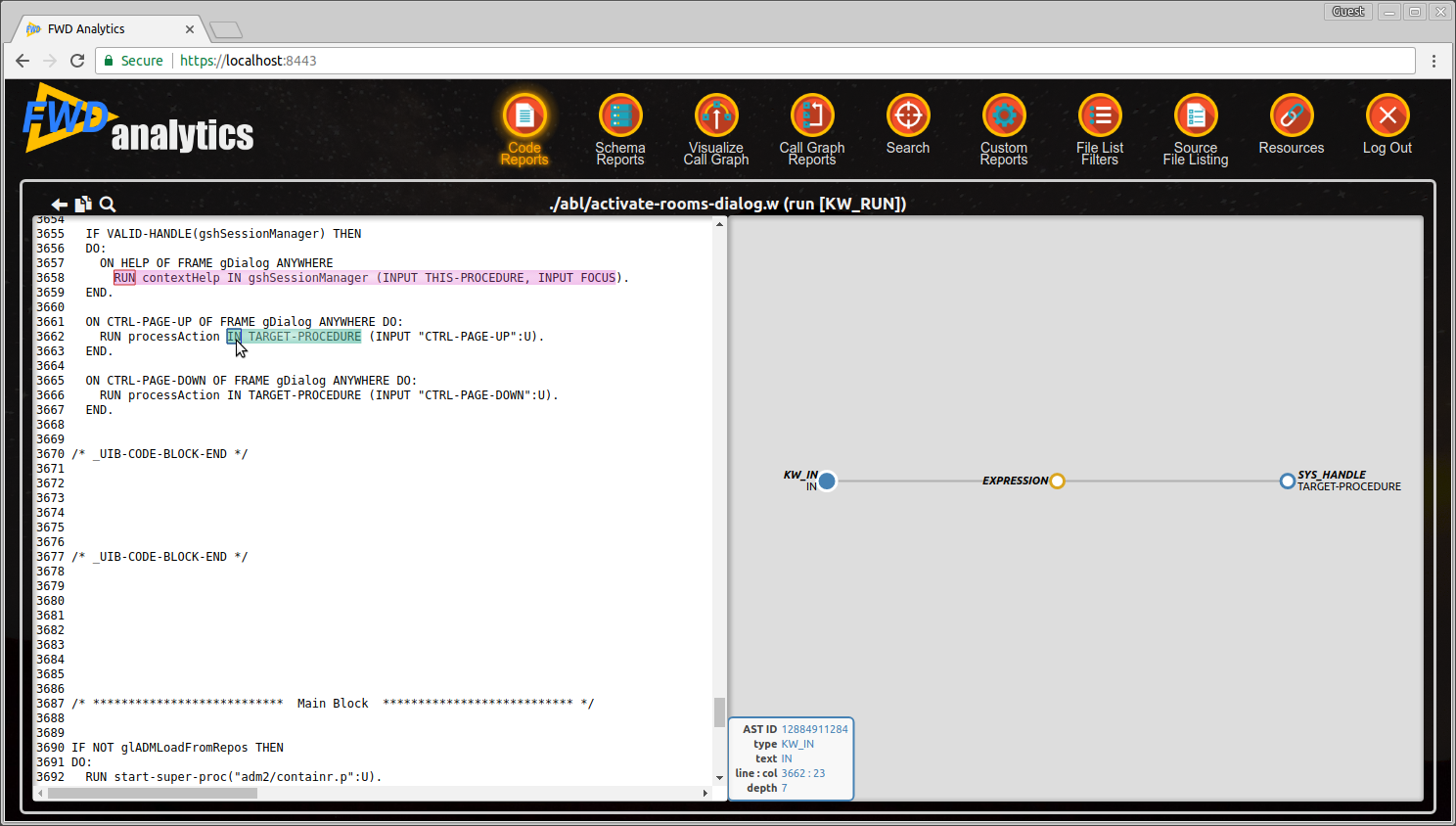 Likewise certain actions in the AST Pane can change the current selection and this will be displayed in the Code Pane. See below for more details.

If source text in the Code Pane is associated with an AST node, hovering the mouse over that text will cause that node and any sub-tree nodes to be highlighted in blue. The sub-tree root node is boxed with a slightly darker color and the rest of the sub-tree is highlighted without a border.

If the mouse hover occurs on the left side over the current selection (or the initial selection if there is no current selection), then the associated node in the AST Pane will be highlighted and a details display of node data will be shown. 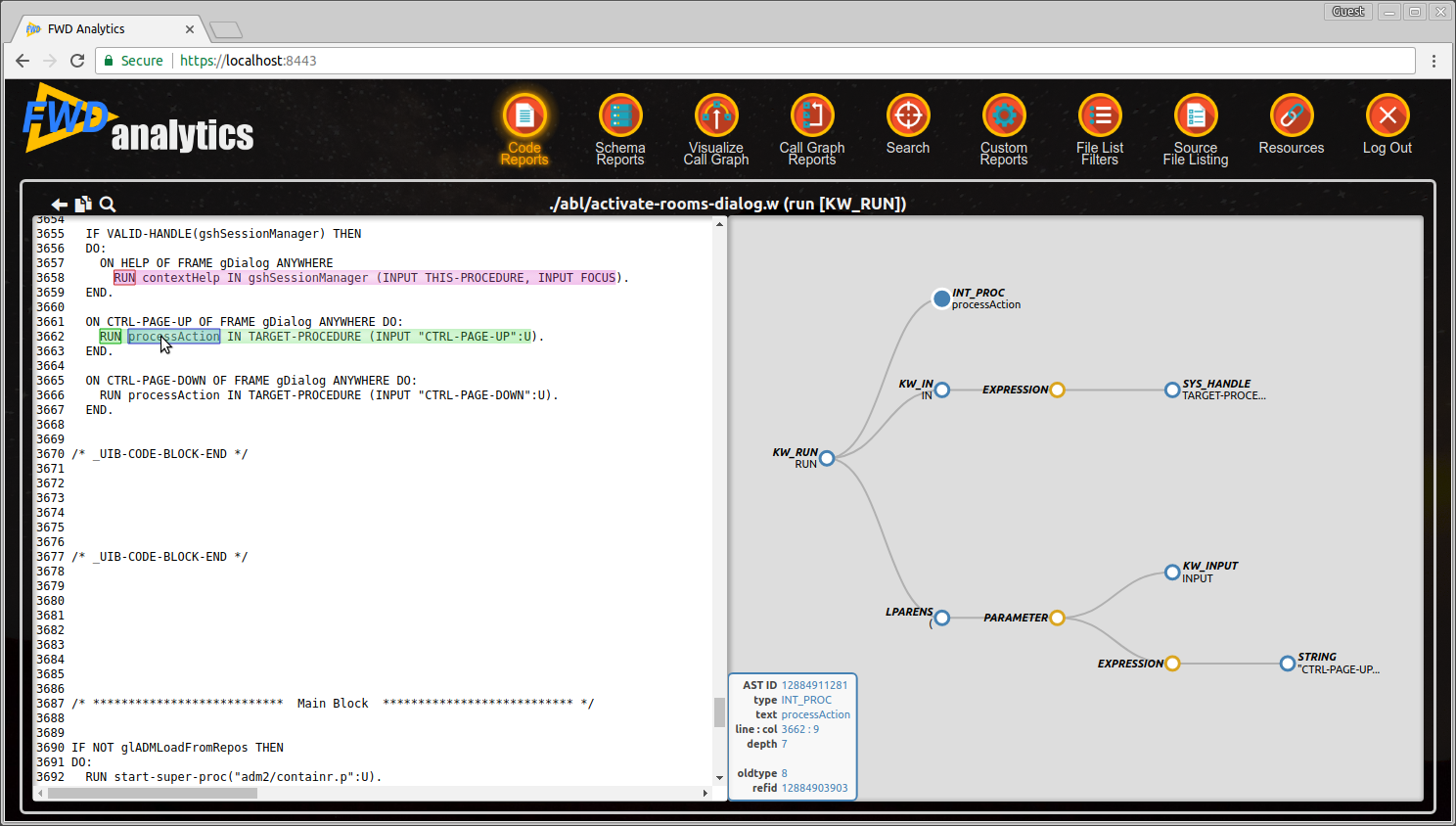 See below for more details.

When the copy button is clicked, the entire fully preprocessed source file (the entire .cache file) will be copied to the system clipboard.

For most browsers, the following dialog will appear. 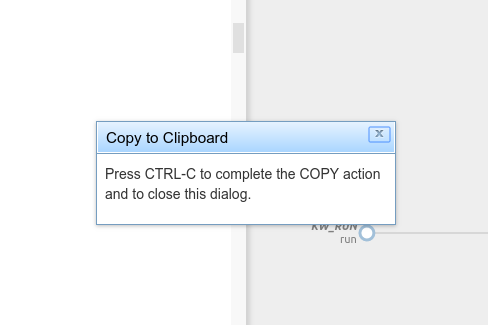 This is needed because of security restrictions that most browsers implement, to disallow direct Javascript writing of the system clipboard. The user's use of CTRL-C in this dialog confirms for the browser that the user intends for the text to be written to the system clipboard and thus there is no security issue.

It is possible to swipe with the left mouse and select text in the Code Pane. Then a right mouse click to bring up a context menu and selection of Copy will copy the selected text to the system clipboard. Using this is limited to text that is currently displayed on the screen. Although it seems as if one can select all text in the file (by swiping down "long enough"), only the currently visible selected text will be copied. This is why the copy button was added to the toolbar.

Using the built-in Find feature of the browser will not work to search the full source text of the file. This is because the text is being rendered using a special graphic Javascript implementation and the entire source file is never loaded at any one time. For this reason a search button as been provided:

Click on the search button and it will change into this Find prompt:

Type any text into the prompt and click down or up to search in that direction. The text searching is done on a case insensitive basis. The currently matched search result will display with a peach colored highlight with no border box:

This is just one line of code of hundreds or thousands in a given file. When the entire program is parsed into AST form, there will be a branch of the tree that is created from this line of code. The branch is considered a sub-tree that is rooted at an AST node associated with the text RUN. The rest of the language statement is represented as child nodes, grand-child nodes as so forth as needed to reflect the structure of the statement.

When the associated AST sub-tree is displayed in the AST Pane, it will look like this: 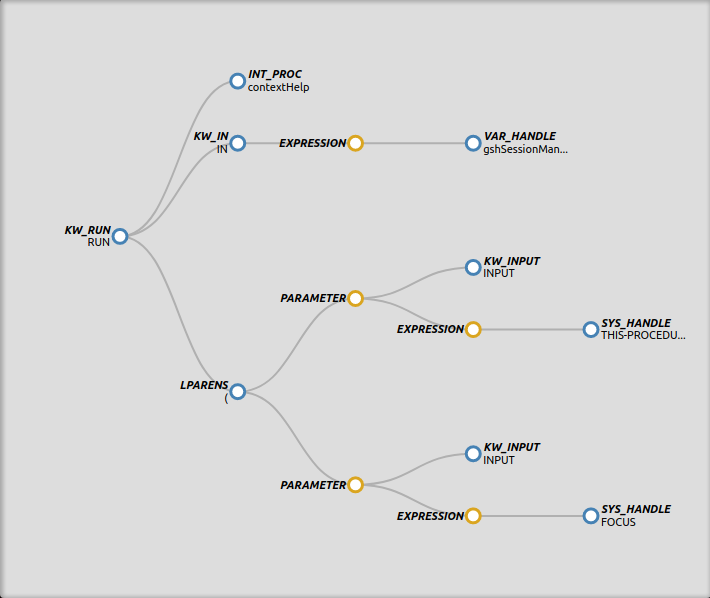 Each AST node is displayed as a circle. Parent/child relationships are represented with a black line connecting the parent (left side node) to the child (right side node).

A blue circle is a node that is directly associated with specific text in the cache file. There will always be the following minimum data in such nodes:

A yellow circle is a node that is "artificial" which means the parser created it to provide some useful structure in the tree but there is no specific text from the source code that is associated with it. There will be the following minimum data in such nodes:

All nodes will often have "annotations" which are arbitrary typed data that are stored in a node. The annotations a node has are usually specific to the token type of the node and they store a great deal of additional information about the node. For example, a FIELD_CHAR node is a field reference of character type and it will have an annotation called schemaname that is the fully qualified name of the field (in database.table.field format).

Child nodes are on the right connected via a black colored arc or line to their parent node on the left. There can be 0 or more child nodes to every parent node. All child nodes must have one and only one parent, except for the root node of the entire program which is the only node in the tree without an parent.

Child nodes have an very specific order. Within a given parent node, the child node closest to the top of the screen is the first child (index 0), the next one lower is the second child (index 1) and so forth.

Hovering the mouse over a node will yield the following results: 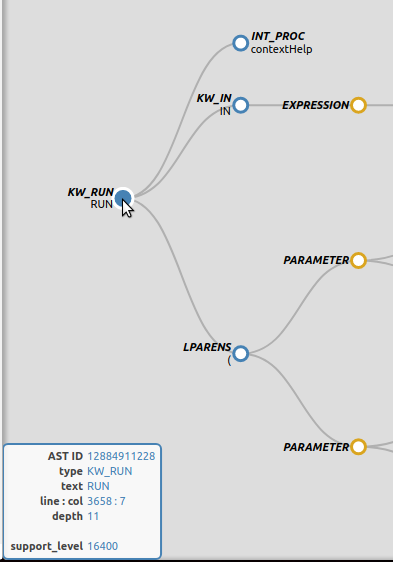 The same results will occur if the mouse hover occurs on the Code Pane over the current selection (or the initial selection if there is no current selection). In this case the associated node in the AST Pane will be highlighted and a details display of node data will be shown as described above.

Left click on an AST node collapses any visible child nodes. Starting with this:

A left click on the PARAMETER node yields this: 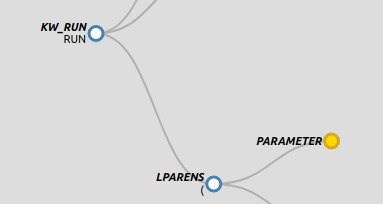 Collapsed nodes have a darker border and a matching colored fill to denote the hidden children. Left clicking on this node again will expand the invisible child nodes, making them visible again.

ctrl-left-click on a node makes it the root node of the view. This allows "walking down" the tree, displaying less of it.

shift-left-click on a node makes the parent of the clicked node the new root node of the view, this allows "walking up" the tree visually, displaying more of the tree.

Given this starting point:

Using ctrl-left-click on the first PARAMETER child of the LPARENS node will result in this: 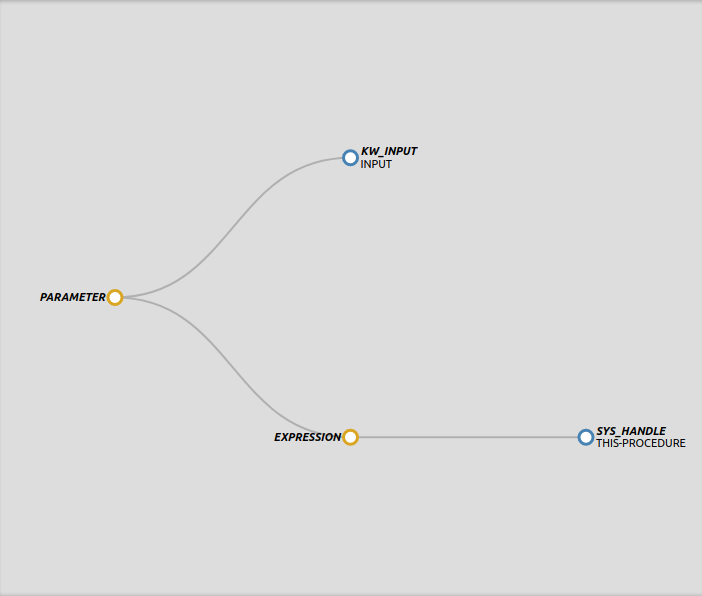 From here, using shift-left-click on the first PARAMETER sub-tree root will cause that node's parent LPARENS node to be the new sub-tree root: 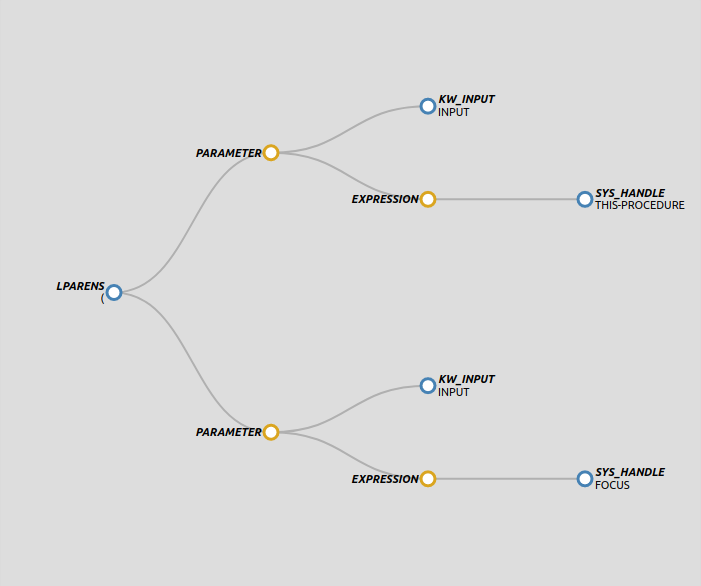 In this way, the currently displayed sub-tree can be changed to show more or less of the overall AST.

When either the shift-click or ctrl-click occurs, it will change the current selection in the Code Pane to match. This will be highlighted in green.

While the mouse pointer is anywhere over the AST Pane, using the mouse-wheel to scroll up will zoom in (enlarging the view) and scrolling down will zoom out (shrinking the view). This is useful for visualizing more of the tree when there are many nodes, or focusing in on part of that tree.

Dragging (hold down left button and move the mouse) the AST Pane will move the content of the view. This is useful when content is off screen which can happen when larger sub-trees are displayed. 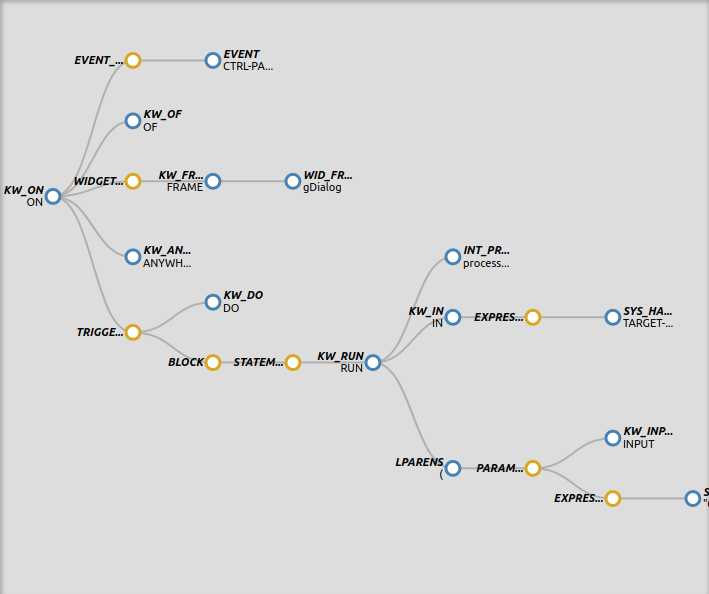 Panned to the left: 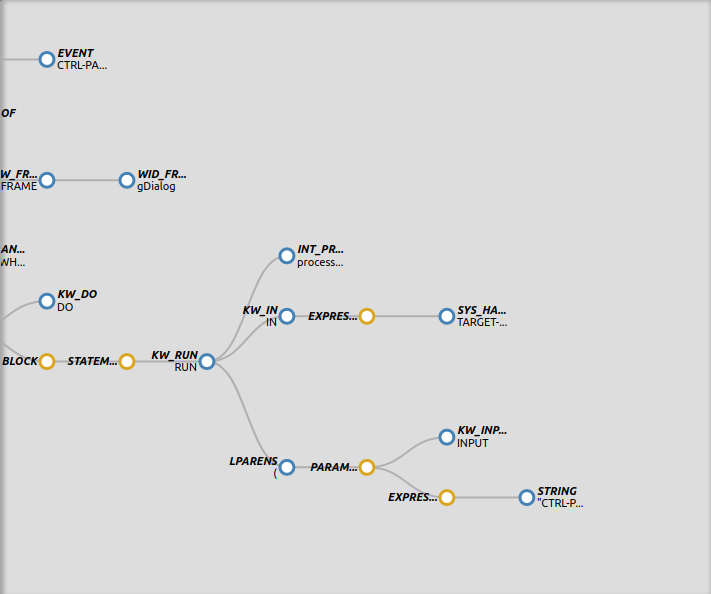 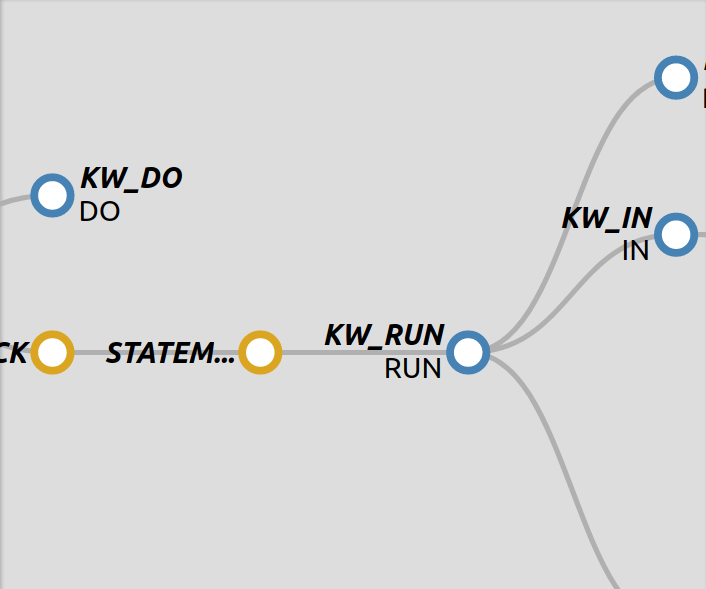 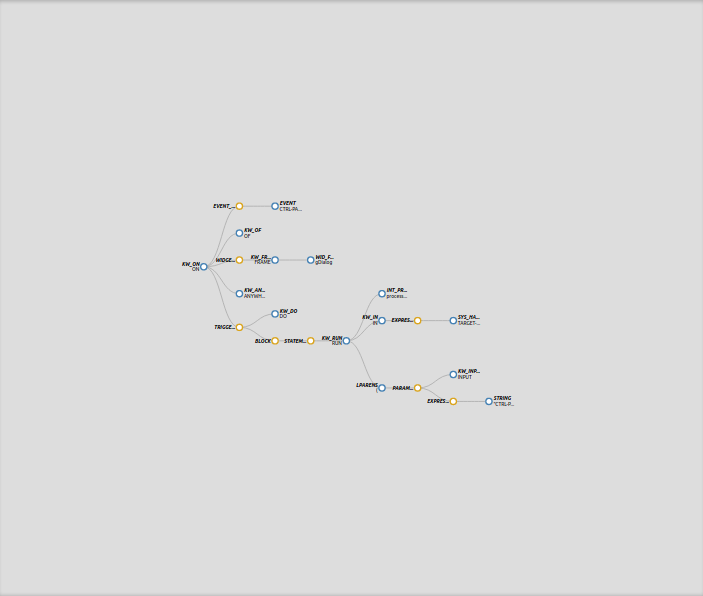 You can zoom in after panning and pan after zooming. All of the various visual transforms are applied on top of the other.

No matter the size or position, this is not just a static image of the tree. The tree is "live" and all of the other navigation, selection and control features will continue to work.

The Code Pane and the AST Pane are linked together such that whenever a selection of an AST node is made, the content of both panes will be synchronized.

For example, on first entry to the screen from a source that specifies the selected AST, the initial selection is displayed in both panes:

Not all text in the Code Pane match an AST node. Comments, whitespace and "syntactic sugar" (text that appears in the source code but is not needed in the tree-structure form of the code) are displayed but not linked. When the user clicks on text in the Code Pane that does match an AST node, a current selection is made (green highlight) and the AST sub-tree that matches that current selection is displayed in the AST Pane. 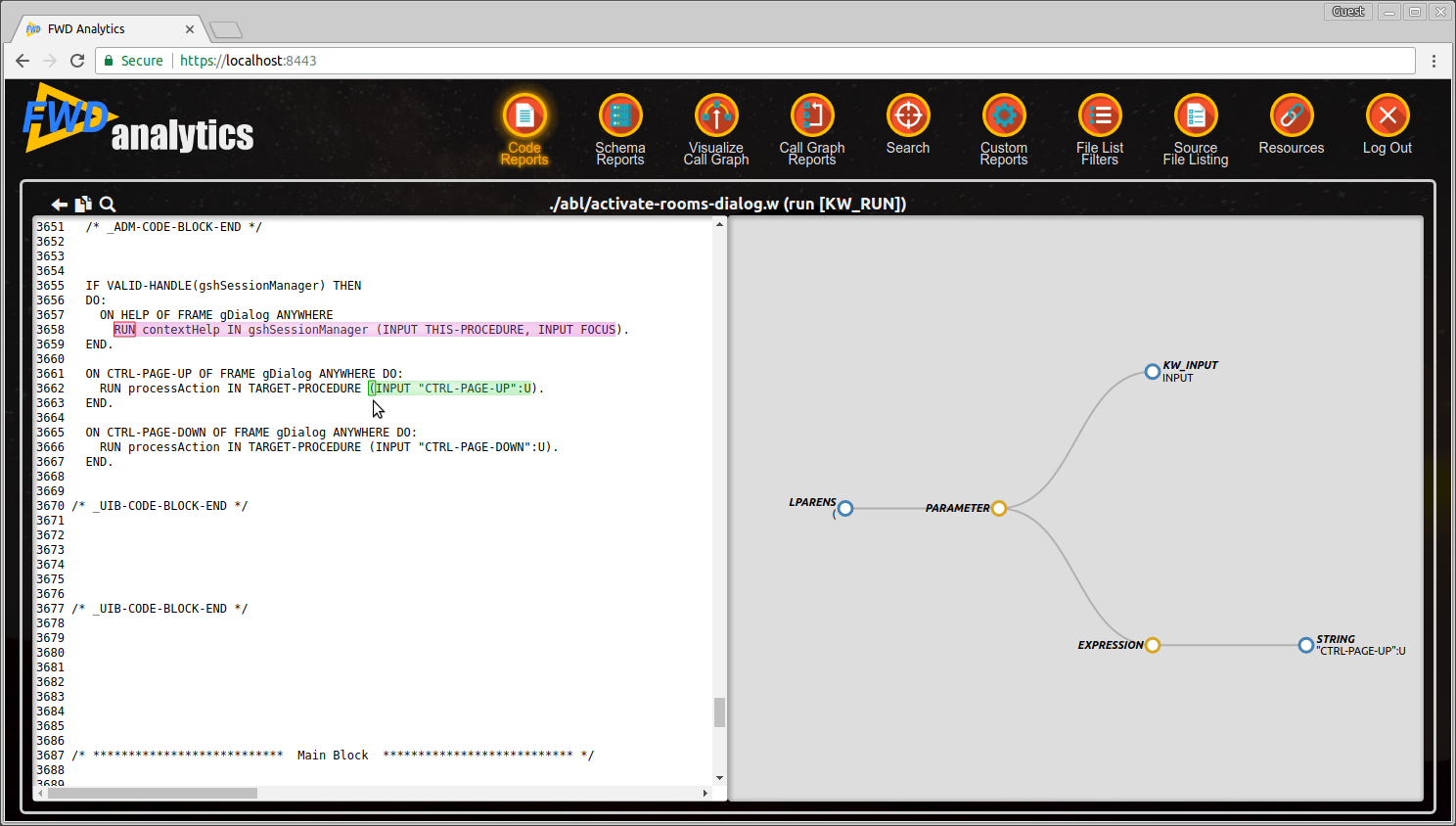 When a new sub-tree root node is displayed in the AST Pane, the Code Pane will show the related source code and that code will be highlighted in green. This can happen by using shift-left-click or ctrl-left-click to traverse up or down (respectively) the tree.